the town the town

The castle of Ambra

For Alicante land castles are held in almost all cities and towns, but Pego, due to its structural characteristics, makes traveling to the deepest of the Muslim epilogue in our Valencian lands.

After the Christian conquest, the structure of the population substantially changed. In the gradual disappearance of farmhouses, he followed the policy of creating new towns destined to house the Christian settlers that he intended to establish.

As stated by P. Guichard, Ambra’s castle is one of the many Islamic castles in the Valencian territory that served as places of habitat and / or refuge by rural communities, with a non-feudal character and that were the object of Transformation and destruction after the conquest. Historic historians date the construction of the castle between the 9th and 11th centuries, but the last investigations and archaeological excavations date from the beginning of the 13th century. The ruins of the castle rise above a rocky ridge formed by the northern buttresses of the Sierra de Migdia, delimiting the Pego valley to the south. It rises to a height of 264 m above sea level and its construction adapts perfectly to the abrupt and rocky terrain of the mountain of Ambra.

The castle did not actively participate in the conquest, but it was important in subsequent Mudejar revolts led by al-Azraq. In 1268 the castle was consigned to Arnau de Romaní, commanding Jaume I to him that in the castle a jail and ten men remained. A year later he went to Bonanat de Guia who had little time, passing in 1260 to Pere de Berbegal, Archpriest of Daroca, guarding him with four men, whom the king paid 150 sous annually. In 1264, the castle passed to Ade de Paterna for the debt that the child in Pere contracted with him. The debt was collected, the king gave the castle credit to P. de Capellades. In 1271 he passed to Pere de Marcén, in the same circumstances.

Finally, after being in the hands of the Saracens for three years, from 1276 the castle began to lose its military importance. He ended up completely losing his importance to the castle when, starting in 1280, the new town of Pego began to be created. After the second settlement letter (1286) granted with better conditions than the first (1279), colonists from Barcelona begin to settle in a new walled town that must be built based on the former farmhouse of ‘Uxola.

Ambra castle is a late Islamic construction, which, according to Javier Martí, begins around the beginning of the 13th century, a product of the fear of Muslims in the face of the threat of feudal conquest. What is most sudden about this statement is the lack of durability of the castle (1220-1280).

But the truth is, that the last excavations have not brought to light any rest before the indicated chronology.

Established the chronology and durability of the castle, another important aspect is knowing whether or not it was inhabited, that is, if it served only as a military refuge or if on the contrary inside there were dwellings. Approximately twenty houses existed with a disposition staggering and taking advantage of the natural structure of the rock. The houses were of small dimensions and the work of formwork of lime mortar and limestone of irregular size.

They also had to have wood, although probably this one was later used for the houses of the new town, since in the excavations there were no remains of this material. The remains of the walls of the enclosure show the value of the defensive architecture; the walls made of tapial, the foundries of rubblework and four cubes (towers) of rectangular ground plan reinforcing the wall. 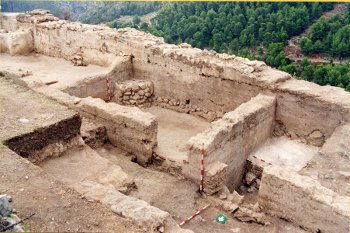 To the Southeast of the same one is the access door to the enclosure, between the vanguard and the wall of the castle. The access consists of two doors arranged longitudinally intercalating among them a body of guard. This body of guard allowed to check between the two gates at night, as well as the rest of the walkers in their access to the castle. In the same guard bank we can see what could be a curious medieval game consisting of eight holes in which stones of different sizes should be faced. In the excavations of the project “Transformations of the structure of medieval settlement in the lands of the Navy”, it was also found at the door 5 bronze money from the time of the reign of James I (1238-1276).

In the interior of the enclosure, next to the second tower of the wall, a cistern or rectangular (12 x 3 m) rectangular ground plan is installed that was used to collect rainwater.

An avant-mural or barbican encloses the walled enclosure, also made in a tapial area but with a smaller height than the inner wall. It is equipped with a recessed entrance and three false buckets that adapt to the layout of the towers and the wall.

Although the castle is in relative good condition, the intense task of bribery and the erosive action of atmospheric agents have greatly damaged buildings.